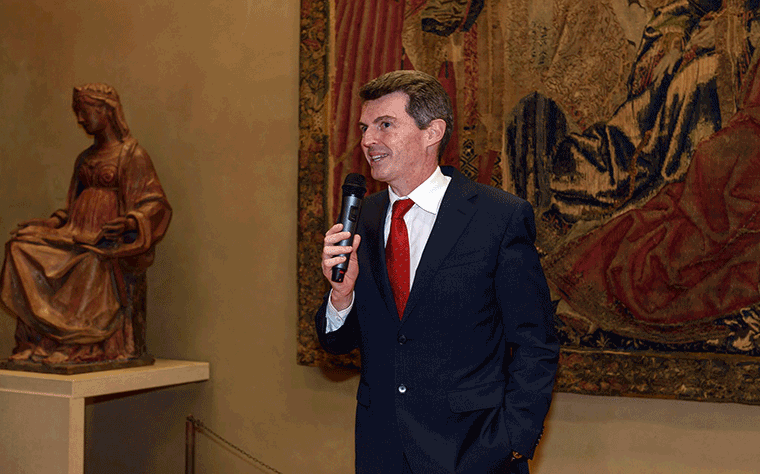 co-curator of the exhibition

GV: Because one of the ‘wefts’ of this event is that of collecting, in the comparison between a modern collector like Romain Zaleski and a much earlier one like Giorgio Franchetti. Ca’ d’Oro is a museum that arose out of the exclusive passion, the obsessive commitment and enormous investment of a single person. A good omen, one hopes, for developing a future project for a textile museum.

GV: This is the second ‘weft’ of the event: always in the direction of comparison, the weave, the relationship. The way furnishing objects were portrayed in early paintings is a subject that is generally little studied by art historians. We have chosen some masterpieces in which carpets have an evident role, but it is a study that really is in its infancy. It would be interesting to achieve in a few years for example a complete survey of the carpets depicted in paintings, at least for the centuries from the thirteenth to the sixteenth. After the seventeenth they actually become very frequent, especially in still lifes.

What did fifteenth- and sixteenth-century carpets represent in the Venice of those centuries?

GV: The function of carpets in paintings is another subject that until now has been very little studied. On intuition one may understand that they primarily mark the sacred nature of the place: the base of Mary’s throne, the floor of an altar, the ground between the angel and Mary in the Annunciation. But already in the fifteenth century we also see another completely different, almost opposite meaning: the carpet that indicates the Oriental setting of an event, for example under Herod’s throne or at the window of a tyrant’s palace. And, finally, a third function is probably more strictly decorative, with the carpets as objects of luxury placed on the sills of balconies. This last use, which emphasises the high social level, is then that which was most in vogue in the sixteenth century, with carpets laid on tables in front of portraits of ladies and gentlemen.

GV: I hope that visitors to the exhibition may literally feel themselves enfolded by this magical atmosphere that carpets and paintings together create in the very elegant staging, in an incredibly evocative building like Ca’ d’Oro. Visiting an exhibition is not like leafing through a book. You have to be captured by the sensations, surrounded by the crossed messages suggested by the temporary matching of works that are normally far apart. If this aim succeeds then the visit to an exhibition is an experience that proves in some ways revealer of unexpected aspects that are rapidly grasped and spark new reflections. The fine video formulated as a short story and the scientific catalogue (well produced by Marsilio) will help those wishing to enter into these subjects more closely.