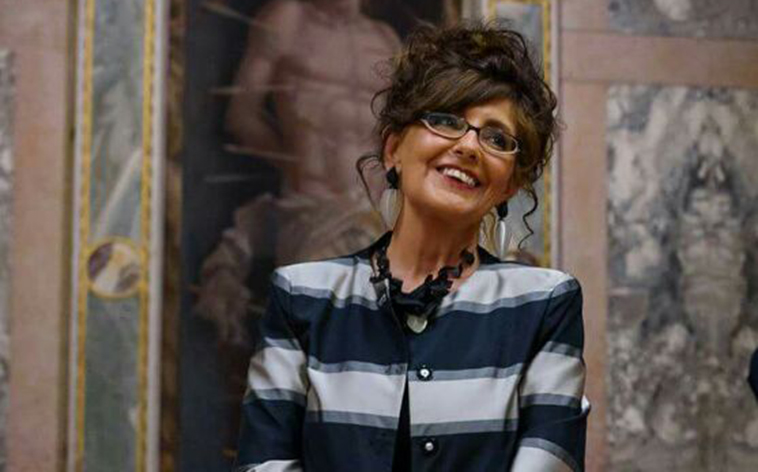 director of the Ca' d'Oro museum and

co-curator of the Venice exhibition

CC: The exhibition follows the thread of a series of initiatives linked to the vital subject of collecting now pursued systematically by the museum and is linked to the project to highlight the small but precious nucleus of Oriental carpets in the Franchetti collection, still kept in storage. It also marks the inclusion of three of the most important textile products in the collection, restored for the occasion, in the permanent exhibition.

At the start of the exhibition and as an ideal introduction to the museum rooms dedicated to the masterpieces from the Zaleski collection, there is an example of Anatolian production and refined weaving - the ‘Holbein’ carpet with tiny designs, dating from the second half of the fifteenth century, which is one of the oldest pieces in Baron Franchetti’s collection. Two Persian carpets restored by the museum are exhibited and ‘staged’ in a small room dedicated to genre painting and northern production between the sixteenth and seventeenth centuries. They are placed in dialogue with other works from the collection that document the global project of the polyphonic harmonisation of paintings, wooden furnishings and monumental spaces in which carpets and decorative arts in general took on their full meaning, in perfect balance between the aesthetic aspirations of enjoying the whole and appreciation of the individual rare product, which the founder of the gallery had conceived.

The display of the two pieces is at the same time intended to document the iconographic fortunes of these precious Oriental products within seventeenth-century genre painting and their proliferation, in particular, in scenes of Dutch interiors.

The sense of ‘tribute’ that this exhibition aims for overall must finally also be remembered. Giorgio Franchetti, collector and great patron, began his collecting career precisely with the youthful purchase of a nucleus of ancient Oriental carpets and textile products, already showing a marked sensitivity for the ‘decorative arts’ during the last decade of the nineteenth century.

CC: Carpets, painting and collecting are the three themes presented by the exhibition, which revolve around Venice, bridge to the Orient and cradle of Renaissance painting. A wealth of metaphors is assembled in its sacred and profane iconography, among which the images of carpets also stand out, in harmony with the society, culture and symbology of the period. At the same time it is precisely the paintings by European Renaissance artists that document the spread of these luxury items.

CC: They document not only the routes of the intense trading flows between Venice and the Orient, but also the style of furnishing in the more gracious homes and the representation of divinity and the social hierarchy. They are often seen covering the base of the throne of Mary and Child, or resting ostentatiously on the sill of a balcony, but also set in an interior to emphasise the Middle-Eastern context and finally - in the later paintings of the sixteenth century - arranged on tables as luxury furnishings.

CC: The visit to the exhibition, along with that of the museum and the Palazzo, with the extraordinary ‘marble carpets’ spread out in the floor mosaic of the atrium, allows the visitor to admire not only a collection of extraordinary beauty and historic importance - that of Zaleski, presented for the first time in Venice and in an extremely charming and evocative museum context - but re-presents, in a certain sense, that ‘dream’ of making Ca’ d’Oro a select container of rare and precious collections of a refined chromatic harmony, pursued since its origins by the founder of the gallery.

Gino Fogolari, who worked alongside Baron Franchetti for a long time setting up the museum, explains: ‘Everything that was beautiful, of bright, musical beauty was to be given to the Ca’ d’Oro; Oriental marbles of those that only the ancient monuments give, paintings of the great centuries on gold backgrounds, tapestries, carpets softened by time, sixteenth-century bronzes with sublime patinas, and it seemed at times that the Ca’ d’Oro and the tradition of the great Venetian conquerors of the East gave the Baron the dizziness of a boundless yearning.’

And it is precisely this glorious tradition of ‘Venetian conquerors of the East’ that links the success and spread in Europe of the precious, ancient, knotted products that are the object of this exhibition; and the choice of its preferred study horizon is centred precisely on Venice and the domains of the Serenissima, between compared figurative documents and the central place, in every period, of the subject of collecting, both public and private.